The 174-kilometer rail line is the first of its kind in the country that is covered by China’s self-developed BeiDou Navigation Satellite System (BDS), and is also the world’s fastest driverless train with a maximum speed of 350 kilometers per hour, according to China Railway Corp.

Connecting Beijing and Zhangjiakou, the co-host city of Beijing 2022 Winter Olympics located in North China’s Hebei Province, the railway reduces travel time between Beijing and Zhangjiakou from more than 3 hours to 47 minutes, which will be a great boost to the coordinated development of the Beijing-Tianjin-Hebei region.

Xi, also Chinese president and chairman of the Central Military Commission, said the opening marked new progress in the preparations for Winter Olympics and called for high-standard and high-quality advancing of related work.

The Chongli railway, the 53-kilometer-long branch line of the Beijing-Zhangjiakou high speed railway line also came into service on the same day, according to the operator. The Chongli district is where the 2022 Winter Olympic village is located. 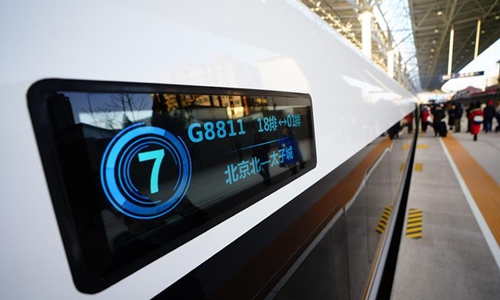 Besides the coverage of BDS, the rail line also features a wide range of advanced technologies such as autopilot and auto-dispatching systems. The self-driving system enables the train to automatically start and run between stations, adjusting its timing in accordance to the schedule while accurately stopping at stations.

The line is also the first in China to adopt a full-lifecycle Building Information Modeling (BIM) approach for all disciplines involved in the project, marking a milestone in China’s railway construction and unveiling the practice of smart railway construction, according to analysts.

Meanwhile, its alarm system, earthquake warning system, natural disaster monitoring system constituted the intelligent dispatching command system for the train. Designed for connecting different Olympic venues, the railway, with the support of dual model 4G and 5G equipment, could facilitate the switch of signals, supporting the upgrade to 5G networks in the future and assist with live streaming of the Olympic games.

“This will also be an opportunity to showcase China’s technological development to the world,” Zhao Jian, a professor at Beijing Jiaotong University, told the Global Times on Monday.

Over the past decade, China has built the world’s most modern and developed high-speed railway network, with operating length surpassing 35,000 kilometers as of the end of 2019, ranking first in the world, according to media reports.

“The rail line showcases smart rail technologies such as autonomous driving, 5G-enabled services, on-board Wi-Fi and e-ticket services, setting an example for the future development of China’s railway and it could be key features for the nation’s high-speed rail diplomacy,” Luo Duhao, chief engineer of the Beijing-Zhangjiakou High-Speed Railway Line, told the Global Times on Monday. 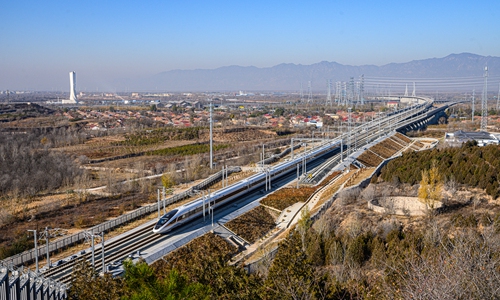 The construction of the railway and high-speed rail line has significant implications on China’s economic growth, as the country aims to reach 150,000-kilometer of railway network by 2020, within the aforementioned figure, high-speed rail distances will reach 30,000-kilometers, covering 80 percent of major first-tier cities.

Beijing-Zhangjiakou railway is of particular significance in the development of China’s railway system. The line, first built from 1905 to 1909, was China’s first railway that was designed and built solely by Chinese.

“110 years ago, the rail line was first built, bringing opportunities for the city. 110 years later, the Beijing-Zhangjiakou high-speed rail went into service, becoming a vital symbol for Beijing-Tianjin-Hebei integration, which is also fortunate for us,” Wang Ping, a local resident of Zhangjiakou, told the Global Times on Monday.